In case this is your first time hearing about the project, I’d like to introduce you to the heir of all lint and space rocks, NoodleFeet:

Like his name suggests, Noodle is a “feet-based” mechanical life form who has been designed to taste objects (among many other things). Though Noodle has lofty aspirations for world domination, he is still a fledgling one-year-old… and his mommy (me) needs to work on equipping him with all the space exploration and world conquering super goodies he’ll need while on his journey. For that, he is in a state of perpetual growth.

My challenge to myself : I decree, each of Noodle’s robot feet must be able to grip onto surfaces with many small cherry-red toes so that a long central silicone tongue can dart forth and taste surfaces while expelling frothy wetness from a reservoir within. All three mechanical systems must work consistently, and fit collectively in the same 4″ x 9″ cylindrical space:

OK, SO… A LITTLE LICKING, AND THE PROSPECT OF DROOL… BUT FIRST GRIPPING:

About a year ago last Fall, I stumbled upon a video of a space probe developed by JPL, that was designed to cling to the surface of asteroids while drilling out a sample of rock. The probe was able to grip onto stone surfaces with hundreds of tiny micro-spines which branched out radially around the central shaft that housed the drill.

I was very inspired by this… and it became an instant decision that Noodle must have gripping toes of his own. Up until this point, his feet were in fact white pool noodles (which is where his name comes from). They were soft and light, but completely passive and somewhat boring for a dominating robot’s appendages. This obviously needed to change.

If JPL could do all this with metal, I wanted to somehow design a working facsimile made completely of 3D printed parts (after all, that’s the only tool I had to work with).

The magic was in the design of the individual toes themselves. All of the tiny hook-like toes were attached to a common ring by long flexible filaments:

The ring would need to be driven downward in order to force the toes through individual channels and out from slot-like sheaths. Finding a *good* way to drive the toes downward would become a bit of a challenge for me…

At first, I naively thought I might actually be able to use solenoids as a form of linear actuator:

I did a lot of design and printing, only to realized the solenoids are in fact pretty weak, and not ever going to have the ability to press against the force of my springs; at least not ones as small as I would need in order to fit in Noodle’s feet:

I eventually devised of a rotating cam with ramps that would convert radial motion into linear movement and press the tiny gripping toes downward:

After I proofed out the mechanism, I had only to add a servo motor to the design in order to dive it. At this point I needed to find a strong enough motor and remove as much friction from the parts as I possibly could. 3D printed pieces tend to be a bit bumpy:

With the toes gliding in and out from their sheaths all on their own, I would still need to figure out how to cram the other two (licking and drooling) systems into the same 4″ x 9″ space. Since it would need to overlap in some ways with the already present toe assembly, I decided to tackle the tongue and its actuator next… 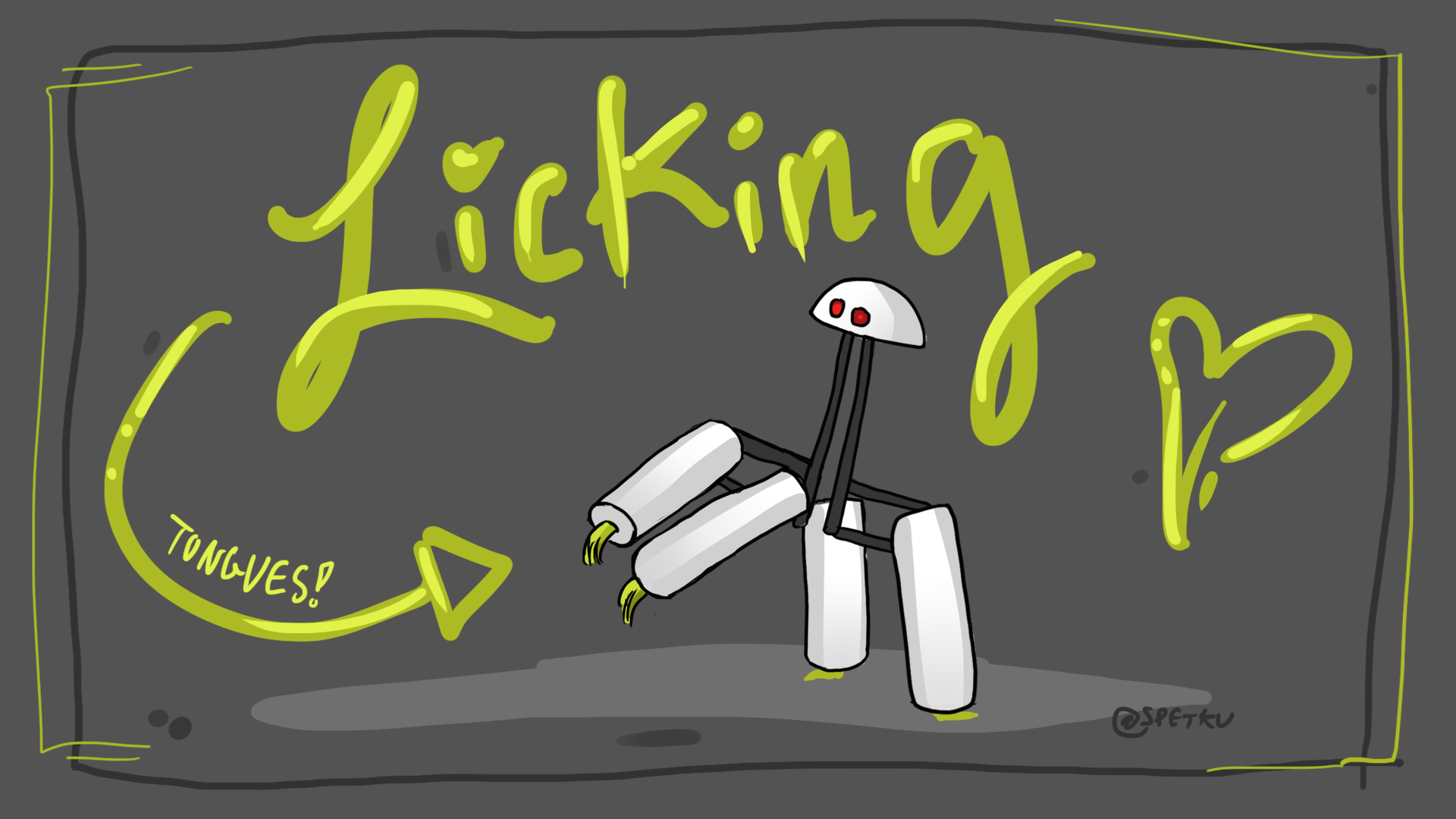 The tongue piece is a silicone brush that I bought from Ali-Express China. It is some sort of baster that was originally attached to a squeezable bladder. The brush end is removable and has a single pore in the center for excreting fluid. PERFECT for when I add the salivating feature later on:

I tried for a day or so to come up with a rack and pinion system to push a spring tensioned tongue out the bottom of Noodle’s foot. Though it worked, it had a tendency to bind and wasn’t as reliable as I’d need it to be.

My mechanically inclined machinist friend, Tony is responsible for scrawling something down on a sheet of paper that I’d eventually design in CAD, and use in the final version of the foot. It’s a simple parallel linkage that fits nicely amidst the center of the toe mechanism and needs only a simple micro servo to actuate. Less is more:

At last, both the gripping and the licking happening in sync:

With the feet really starting to take shape, it was time to address the third and final function: DROOLING.

Just as I began thinking about how I was going to add the element of fluid to Noodle’s feet, I went backwards and once again became seduced by toes; the very toes that started this whole toe story.

At the start of summer, I ran off to Pasadena for JPL’s open house. There I saw the glorious multi-hooked gripping LEMUR apparatus in person… and I was reminded that though sometimes less is more, sometimes more is more– and in the case of toes, more is ferocious and mighty.

But… that is a story for another article. This detour of toes is a developmental universe in and of itself. I’ll be publishing the conclusion of this endeavor soon before giving a talk on all things tasting feet @ HackADay’s SuperCon this November! If you happen to find yourself there, say hello to Noodle and I. With any luck, he’ll be able to greet you with a sensation of wetness.